Home / Lifestyle & Money / Intersting Quotes about the Value of Money 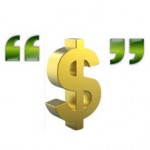 Money, how we earn it and how we use it, is one of the most talked about topics in life. Money affects the way we live from day to day, affects our relationships to one another, and ultimately changes the way we feel about ourselves and what we do with our lives.

Famous people are often asked about their impressions about money and how it affected their lives. Business magnates have a different perception of money than average working stiffs who are just working to get by. For many of us, we think of money as a means to become free from worry and concern. You would be surprised to learn that even billionaires work for their money and think about its meaning in their lives.

Money and Work
Henry Ford, of Ford Motors, said, “A business that makes nothing but money is a poor business.” It is not enough to have money earned from your business; you ought to use your wealth to create better lives for your workers and your customers. Charity is not just a handout; it is also a hand up.

Ford also recognised the value of respecting customers. He believed that “it is not the employer who pays the wages. Employers only handle the money. It is the customer who pays the wages.” He understood that a business that does not recognize the important of its customers will ultimately fail.

Sam Walton, the Founder of Wal-Mart agreed with Ford when he said, “There is only one boss. The customer and he can fire everybody in the company from the chairman on down by spending his money somewhere else.”

Money and Life
Money is also about how it makes or breaks a worker’s life. How we feel about the work we do and the wages we earn affect our lives. Bob Nelson, business man and motivational speaker, understood this when he said, “People may take a job for money, but they will leave for recognition.” A good pay check is welcome, but to feel valued is often more important.

We need to feel a purpose in what we do. Money will only go so far to satisfy human needs such as shelter, food and clothing. Steve Wozniak, of Apple Computers, once said, “I didn’t set out to make a ton of money. It was to build better computers.” Wozniak had a purpose that drove him and his company to success. The money simply followed his bliss, or as Marsha Sinetar, educator and author, put it, “Do what you love and the money will follow.”

Money and Debt
Ultimately, money or the lack of it can affect our lifestyles and relationships. The struggle to tend to the basic needs can end a marriage of love over mismanagement of funds. It can lead to desperation. Mark Twain, popular American Author and speaker, was once quoted to have said, “The lack of money is the root of all evil.”

However, if one learns from mistakes and takes certain concepts into their lives they will eventually have a better relationship with money and their other relationships will be less burdened. Indeed, William Shakespeare, the old bard himself, once sagely said, “Neither a borrower nor a lender be.” Manage what you earn and save as much as you can to avoid borrowing, and avoid lending money you can ill-afford to lose.

Learn to save money in order to have the money you need to live and work. Joel Osteen, religious leader and motivational speaker spoke on the subject of saving: “If you want to rear financial blessing, you have to sow financially.” Saving money now will provide the means to live later in life when your work years are over.

What are some great quotes or comments you have heard on wealth or personal finance?